Thousands of Hoosiers crammed into the Statehouse on Monday, while hundreds more took over sidewalks and streets outside with loud chants and even a band – most in support of abortion access.

Meanwhile, yards away Vice President Kamala Harris spoke to legislators in support of reproductive rights. And senators listened to four hours of testimony on the bill.

Last week, Senate Republicans unveiled their legislation that would ban all elective abortions from the moment the embryo implants in a uterus, with exceptions for rape, incest, fetal abnormalities and life of the mother.

Both the House and Senate convened to officially begin the special legislative session addressing both the state’s surplus and a new abortion law,

After the House adjourned, Speaker Todd Huston, R-Fishers, said criminal penalties as well as exceptions for rape and incest would continue to part of the conversation within his caucus but didn’t have further comment on the Senate’s bill.

“Truthfully, I’m waiting to see what they send us,” he said. “I have looked at the Senate Bill but I hate to make too many comments until I know what we’re actually going to see.”

In the past, the Republican supermajority rebuked Democratic efforts to repeal Indiana’s diaper tax, which the House suggested in HB 1001. Huston said unlike past years, the state is in a different financial position. 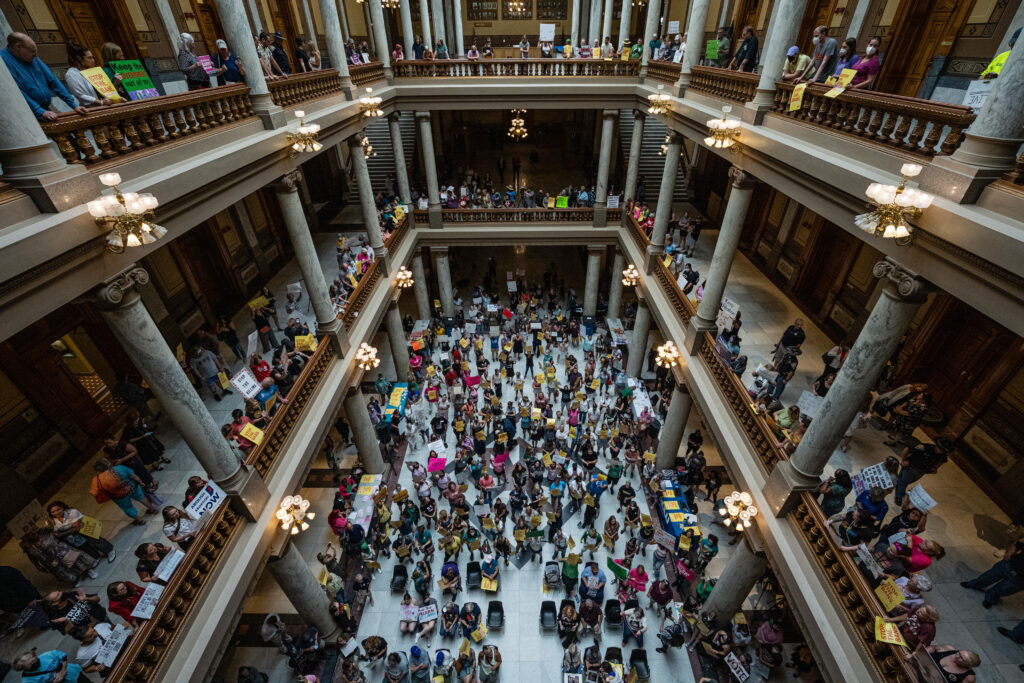 INDIANAPOLIS, IN - JULY 25: Anti-abortion and abortion rights activists protest on multiple floors within the Indiana State Capitol rotunda on July 25, 2022 in Indianapolis, Indiana. Activists are gathering during a special session of the Indiana state Senate concerning abortion access in the state. (Photo by Jon Cherry/Getty Images) 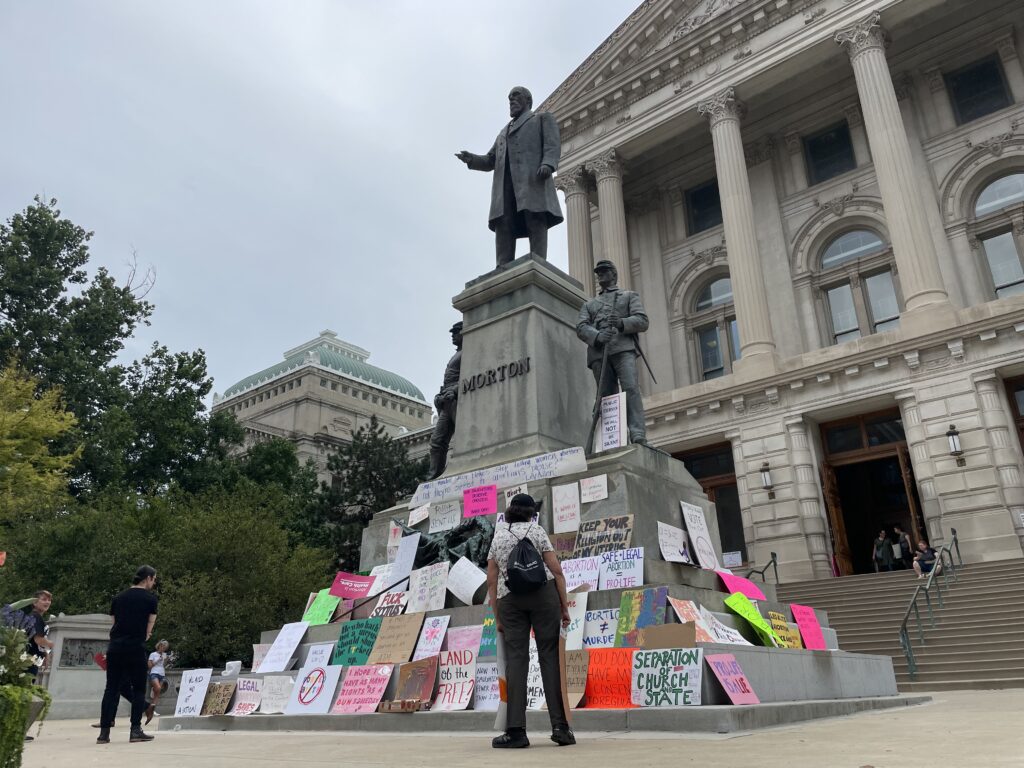 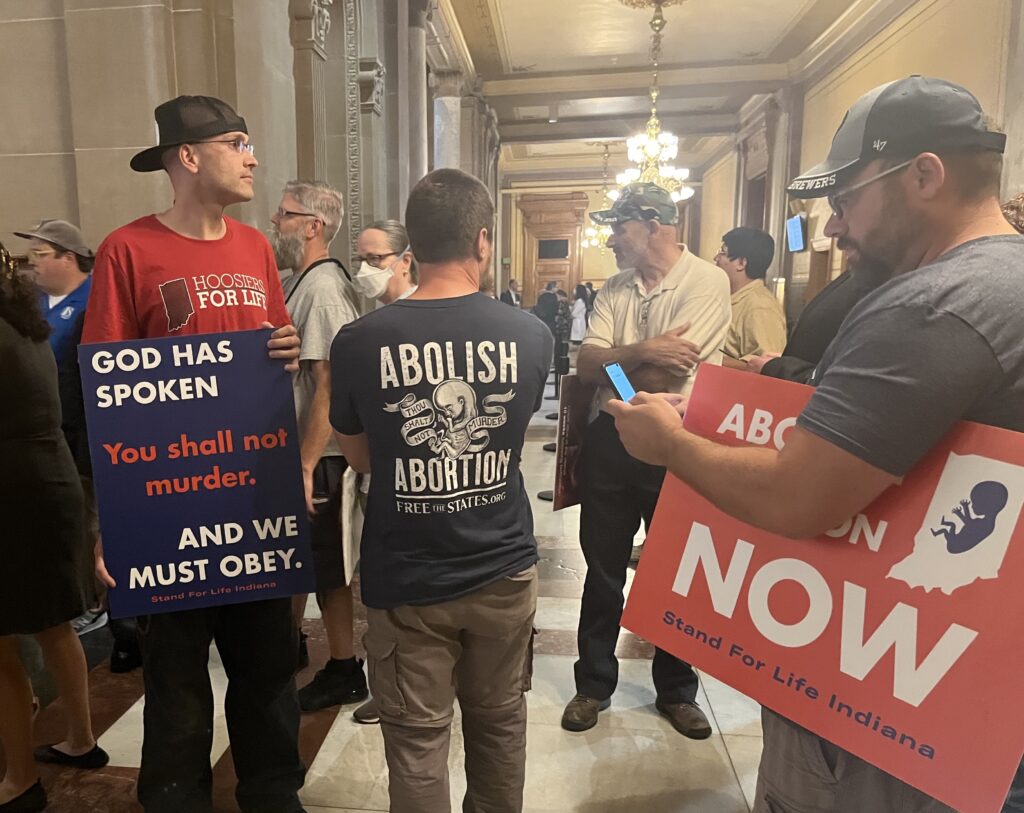 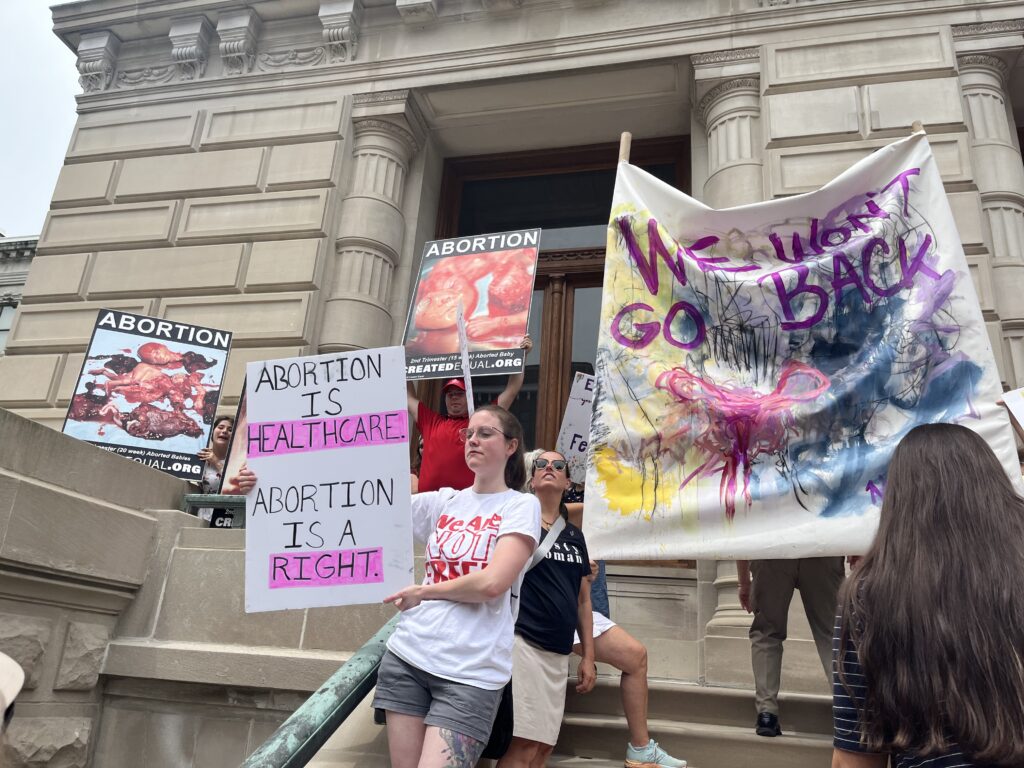 Advocates on both sides of the abortion debate line up on the Indiana Statehouse steps on July 25. (Whitney Downard/ Indiana Capital Chronicle)

INDIANAPOLIS, IN - JULY 25: Anti-abortion and abortion rights activists hold signs and sing on a pavilion within the Indiana State Capitol building on July 25, 2022 in Indianapolis, Indiana. Activists are gathering during a special session of the Indiana state Senate concerning abortion access in the state. (Photo by Jon Cherry/Getty Images) 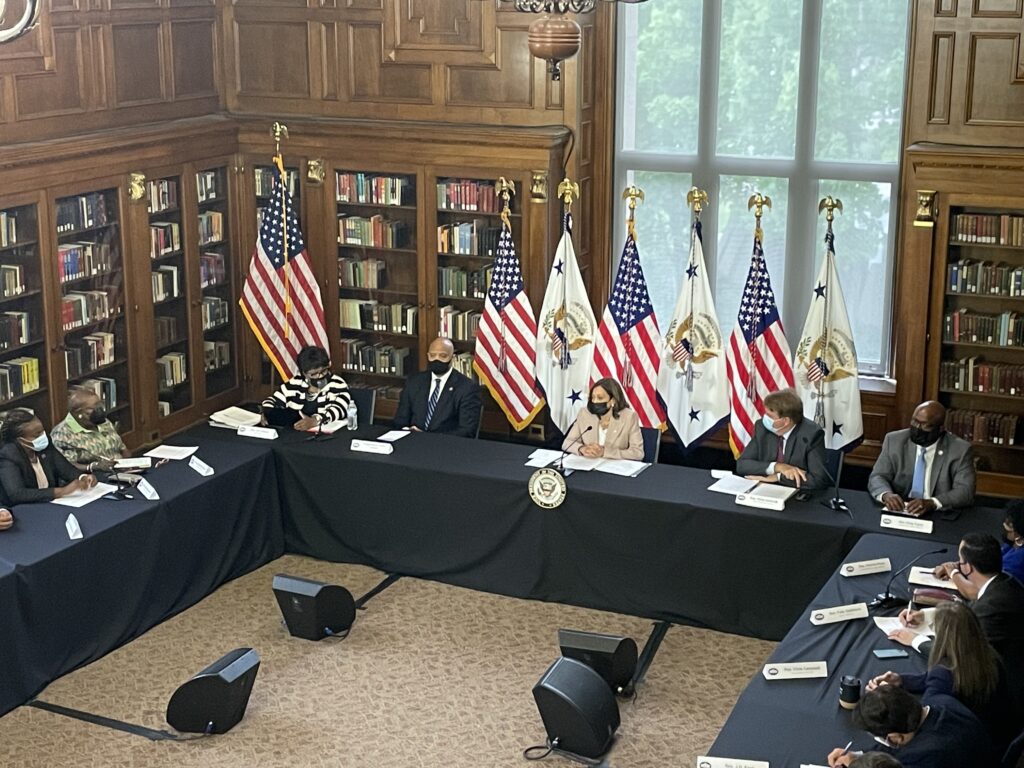 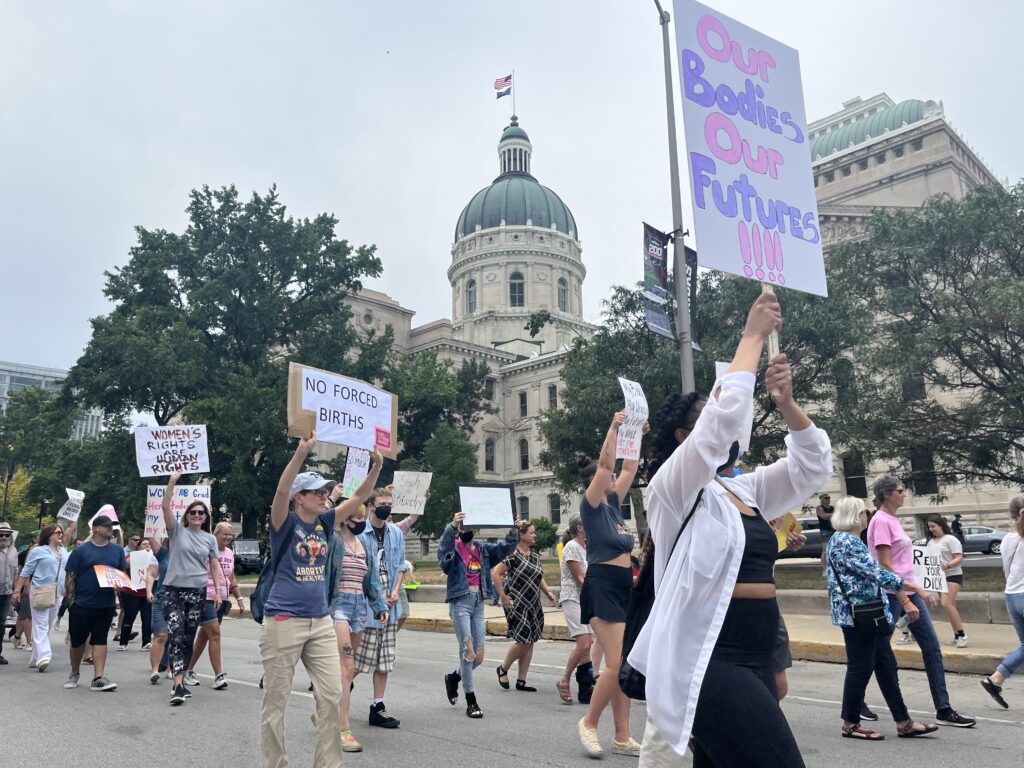 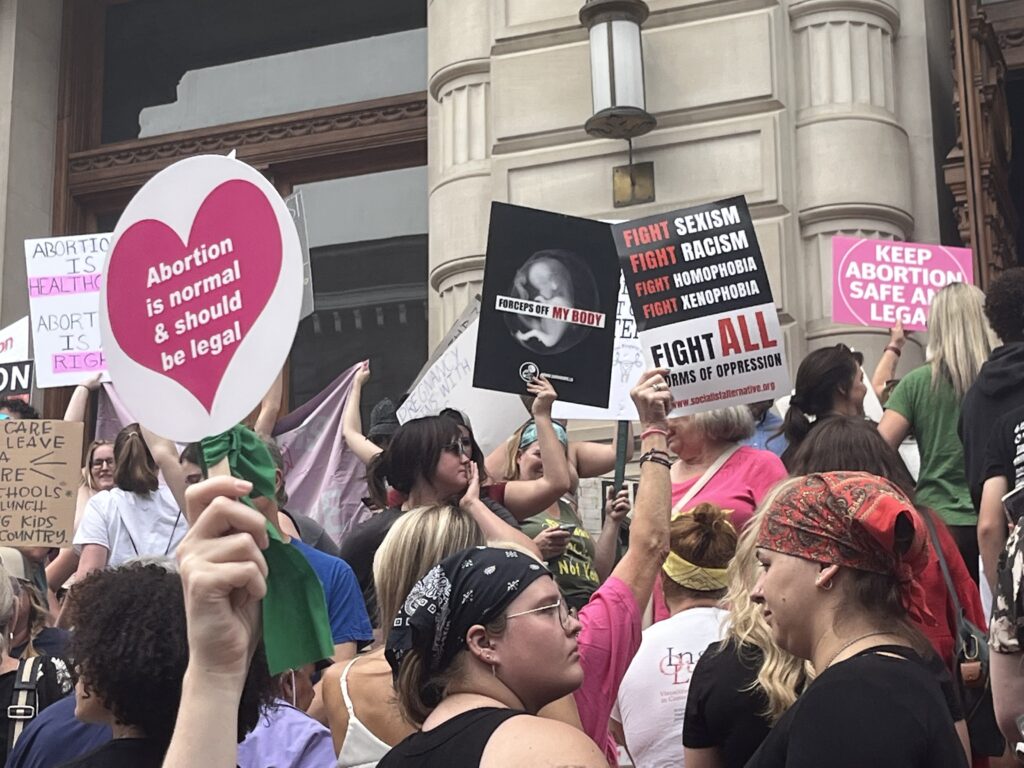 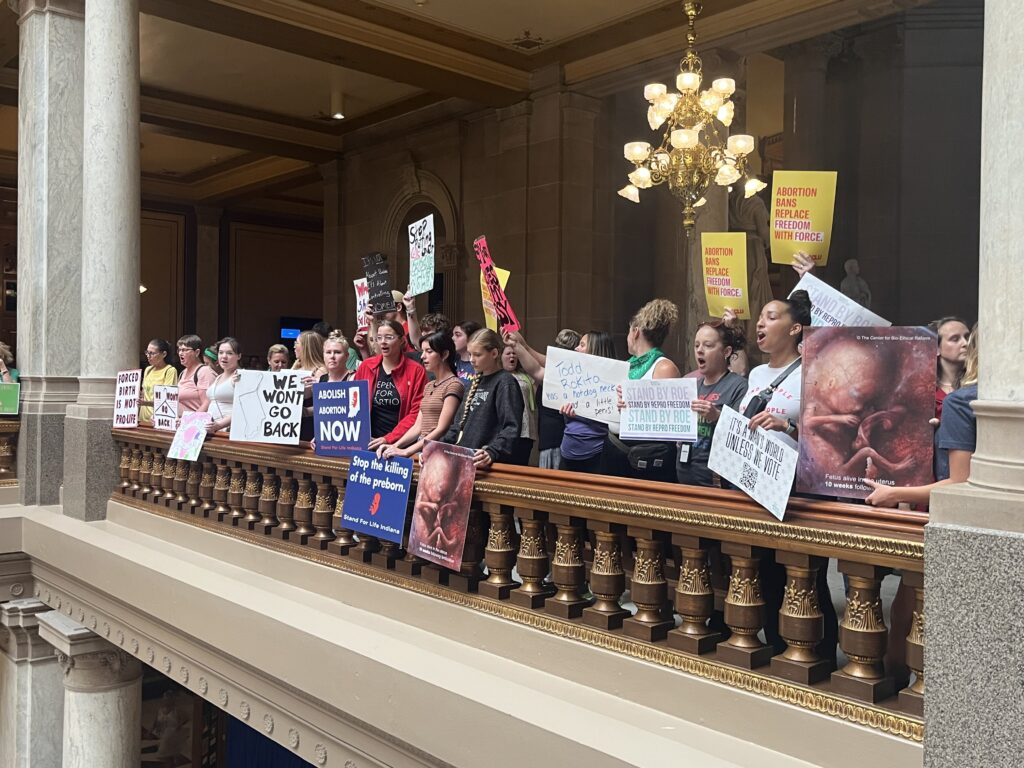 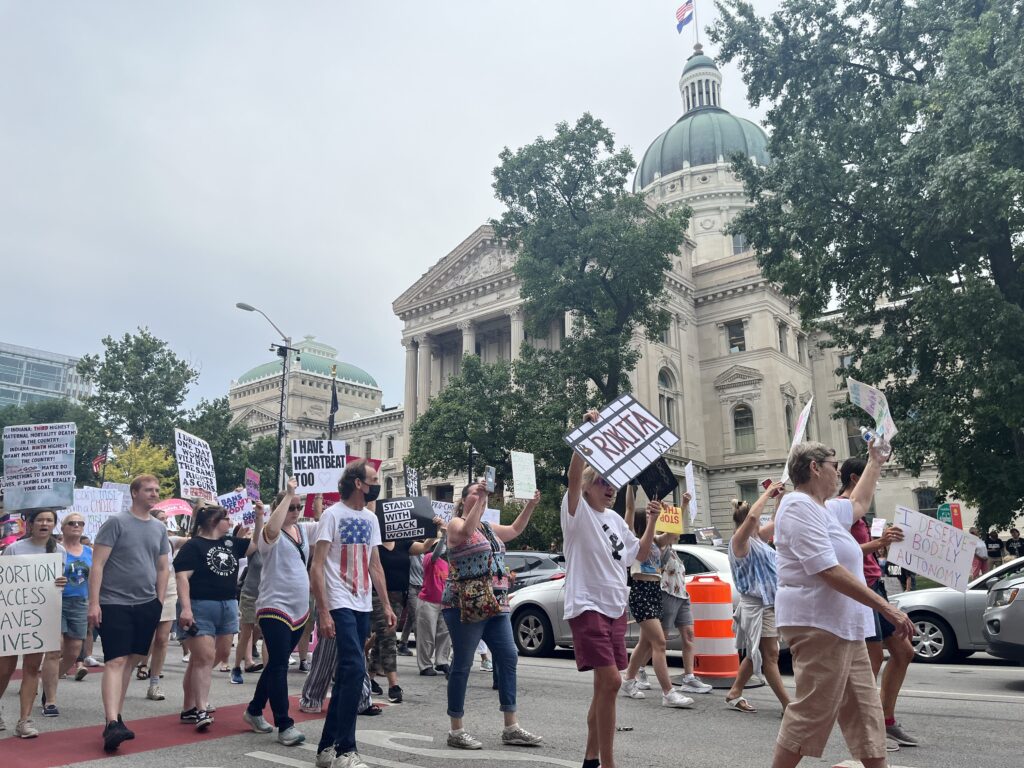 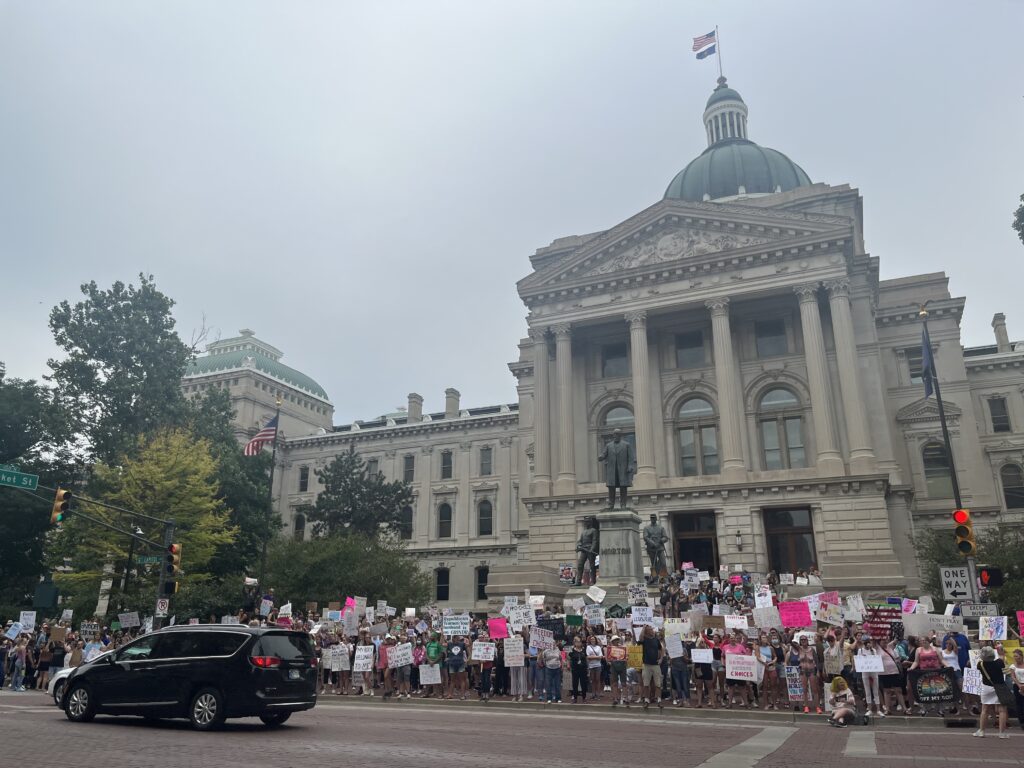 A crowd of abortion rights advocates gather on the steps of the Indiana Statehouse before moving to the street and circling the building on July 25. (Whitney Downard/ Indiana Capital Chronicle) 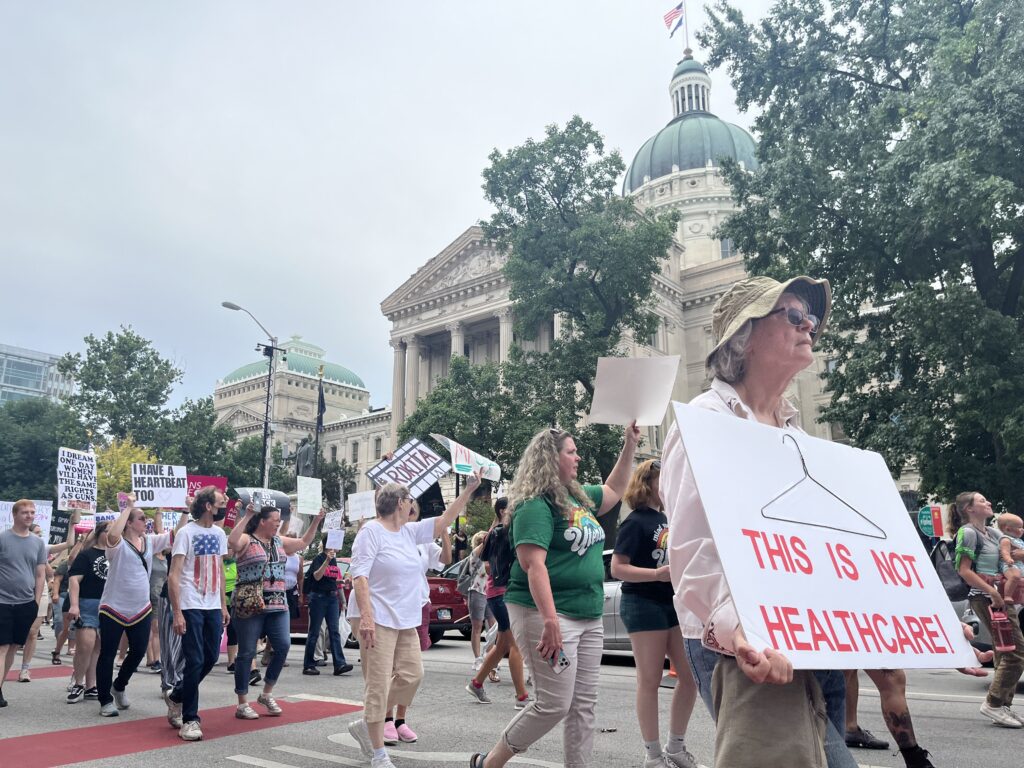 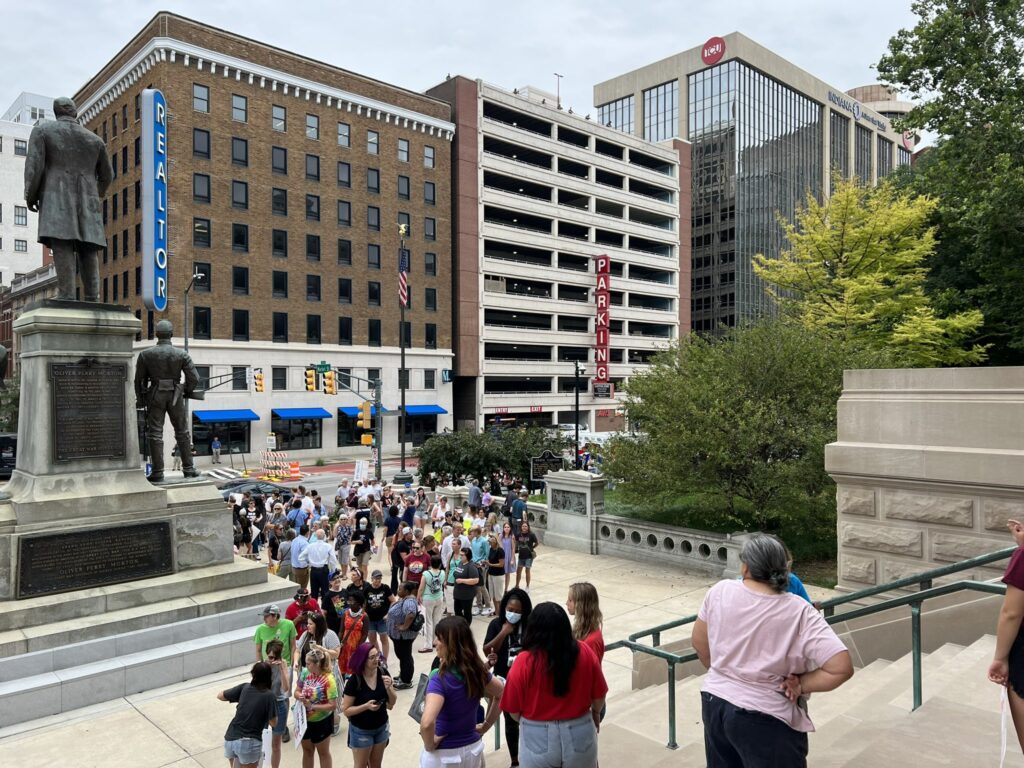 Hundreds line up to get inside for rallies and a hearing on proposed abortion ban at the Indiana Statehouse July 25. (Casey Smith/Indiana Capital Chronicle) 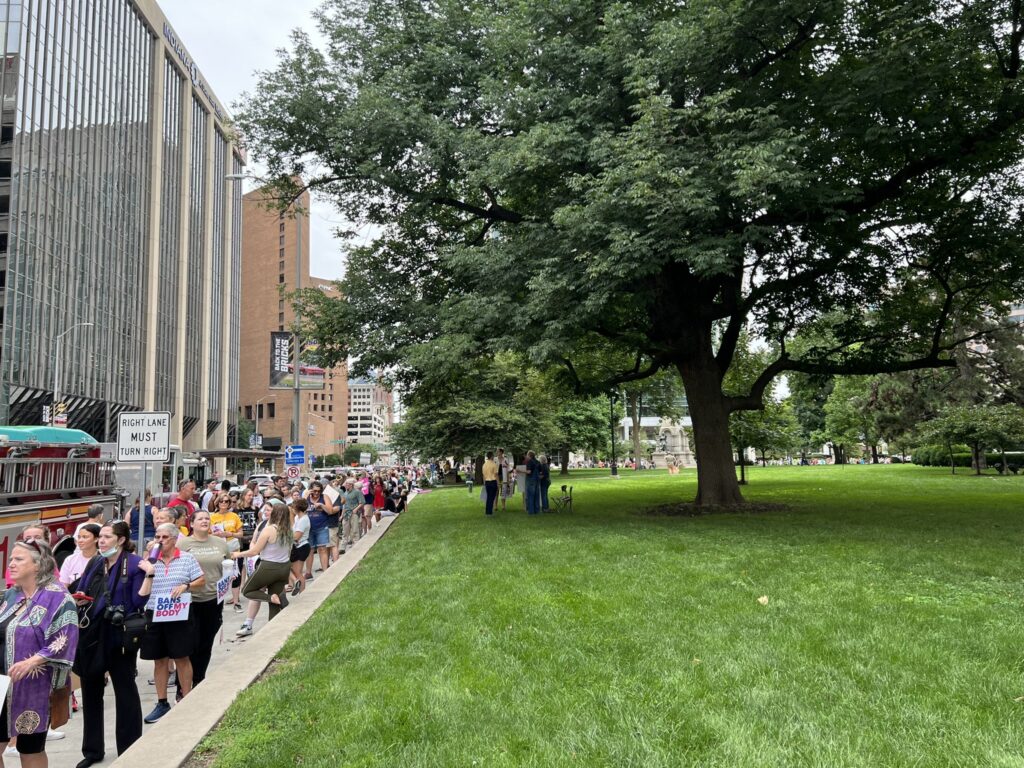 The line to get in the Statehouse on July 25 at one point wrapped around the building as many wanted to support or oppose a proposed abortion ban. (Casey Smith/Indiana Capital Chronicle) 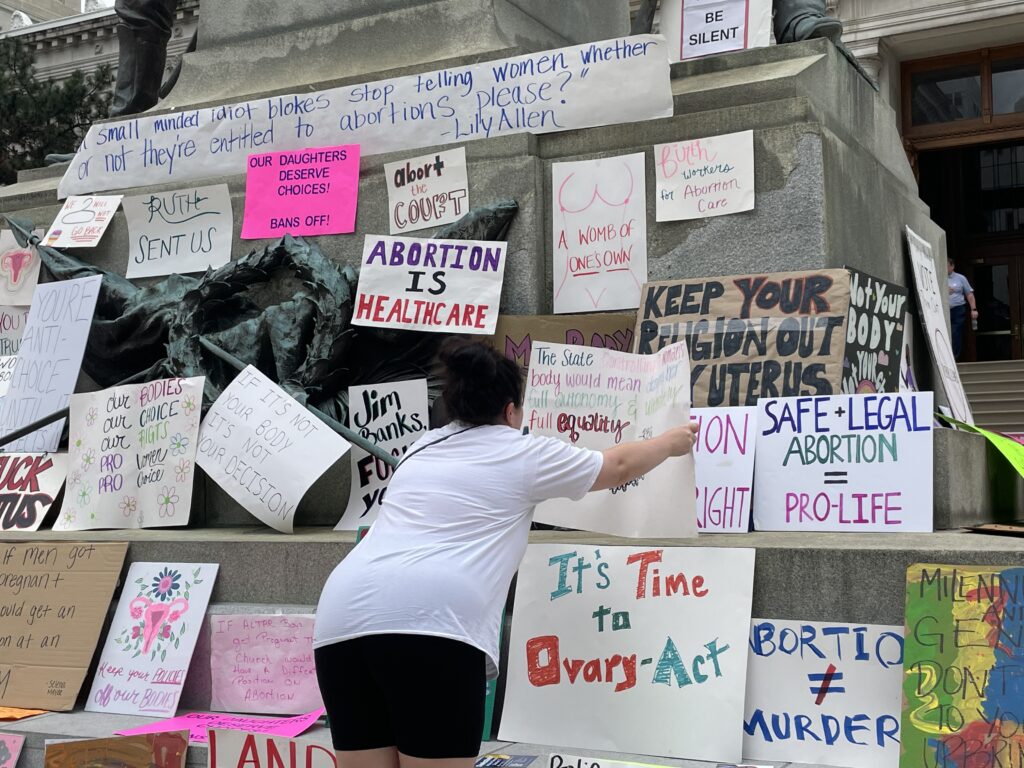 “This is about protecting women; this is about supporting babies,” Huston said. “We just felt like these were common sense proposals to support women and children.”

Inside the halls a few dozen anti-abortion protesters, many of whom decry the bill for not including criminal penalties, verbally clashed with Hoosiers supporting abortion rights. Hoisting graphic illustrations, they sang hymns while abortion rights proponents chanted, “My body, my choice.”

State officials said at its peak more than 1,500 visitors were inside the Statehouse.

Advocates in favor of abortion access vastly outnumbered the anti-abortion group, who are scheduled to rally on Tuesday.

At the rally inside — organized by the American Civil Liberties Union of Indiana, Planned Parenthood and Women4Change — speakers led hundreds of Hoosiers in chants as dozens more lined up to speak in a Senate hearing and thousands of others rallied outside.

Speakers observed that wealthy Hoosiers will still be able to access the healthcare procedure while Black and Latino Hoosiers, impoverished Hoosiers and gender non-conforming Hoosiers will bear the brunt of the ban.

“They will suffer the most under an abortion ban but all Hoosiers will benefit from reproductive justice,” Amy Caldwell, an OBGYN with IU Health, said. “I will keep doing my job and I will keep taking care of Hoosiers to the best of my ability. But this (energy) needs to go beyond the next election… we need to keep showing up.”

At one point protesters spilled out from the Statehouse steps and blocked Capitol Avenue, marching around the building. Speakers blasted music and sermons throughout the day. Shouts from abortion rights protesters, many lined up to testify in opposition of the Senate’s proposal to limit abortion access, could be heard inside the chamber.

Bennett added that many mothers in domestic violence situations face health complications, including premature delivery and vaginal bleeding. Some abusers use reproductive access as leverage over women.

“Banning a survivor’s right to terminate a pregnancy of their abuser will cost lives,” Bennett said. “The promise of a few more counseling dollars will not make up for (that).”