A commission says that behavioral health spending needs to increase by 60% over the next four years to begin treating Hoosiers with mental illnesses. (Getty Images)

The infrastructure of Indiana’s behavioral health treatment system is underfunded and in need of reform, even as one in five Hoosiers live with a mental illness each year, a new report says.

For every four residents who receive treatment for their mental illnesses, someone else doesn’t receive any services.

The estimated state cost annually for untreated mental illness in the state? According to the Indiana Behavioral Health Commission: $4.2 billion.

“The current system has been proven to be ineffective and inefficient, often taking a toll on the individual, their families, the police, hospitals, the community, and state resources,” the commission said in its final report released this month.

Near the conclusion of the report, the commission lamented how spending on the behavioral health system hadn’t kept up with inflation. The state spent $116 million in 2006 but just $126 million in 2022.

“Just to keep pace with inflation, Indiana should be spending 50% more currently than we did in 2006, or $174,000,000. Our spending has dramatically undershot the mark in the last decade and a half, and the results are evident,” the report said.

The commission evaded an explicit price tag on fixing the state’s behavioral health system, instead advocating for a 60% increase phased in over the next four years similar to how Missouri funded its system overhaul.

The committee detailed several recommendations but focused on two areas it believed were crucial to implement: a comprehensive 988 crisis response system and a new model for delivering free mental healthcare and substance abuse treatment.

988, the mental health equivalent of calling 911 for a public safety crisis, received $100 million from the federal government in the 2021 budget to get started but requires long-term funding to be sustainable. 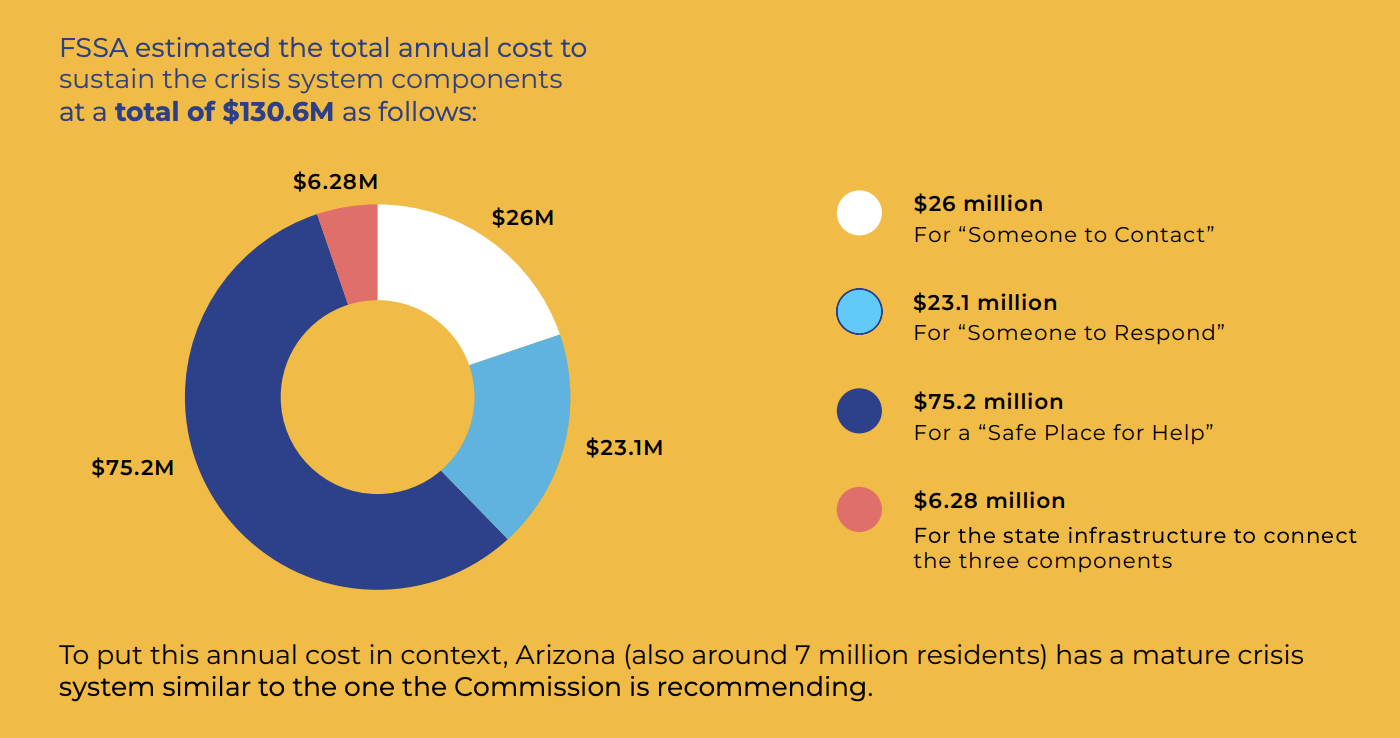 Adding a $1 surcharge to phone bills, similar to the phone bill surcharge that funds emergency medical services and 911, would produce roughly $90 million annually, which is just over two-thirds of the estimated $130.6 million needed to cover the entire system.

That funding would pay for the centralized call center, the crisis response teams, the crisis stabilization units and state infrastructure.

Crisis stabilization units offer short-term services, including medical treatment and housing, for someone experiencing a mental health crisis. Critically, crisis response teams should not include law enforcement officers, which may give someone the impression that they could be punished for seeking help.

“No one wants to call because they don’t want the cops called on them or the hospital to come (take) them away. You’re the last resort for some people so act as if it ends with you. People don’t trust (988) because they don’t want a stranger to hear everything they’re feeling just to be reported,” one anonymous surveyor told the Indiana Recovery Council about their hesitation to use the system.

The far more expensive change would be shifting from Community Mental Health Centers to a Certified Community Behavioral Health Clinic (CCBHC) model, which would increase the availability of day-of services for no charge and provide medication-assisted treatment 24/7.

According to the 2021 CCBHC State Impact Report, CCBHCs can serve 17% more people than traditional CMHCs, on average, and half provide same-day care. The vast majority, 93% see clients within 10 days and each new center posts an average of 41 new jobs.

In turn, the committee said adopting those two policies will relieve the costs for incarcerating Hoosiers with mental illnesses and jail/ prison overcrowding.

Indeed, the Indiana Department of Correction is the single biggest provider of mental health services in the state.

An estimated 37% of people in state and federal prisons, and 44% of people in county jails, have been diagnosed with a mental illness. In 2015, 27% of police shootings involved a mental health crisis.

Being incarcerated exacerbates existing mental illnesses but prisons are often the only place where someone can receive consistent mental health treatment. Perhaps due to a lack of coordination between services inside and outside of prisons, those formerly incarcerated are at a higher risk of committing suicide. Within the first two weeks of their release, this same population is 129 times more likely than the general public to die of a drug overdose.

Millions of Americans live in designated Mental Health Professional Shortage Areas, including an estimated 4.7 million Hoosiers, according to the Kaiser Family Foundation. Indiana would need an estimated 197 more practitioners to cover every resident and shortages are expected to get worse by 2025.

“The lack of an adequate workforce is the single biggest obstacle to implementing many of the Commission’s recommendations. Unfortunately, the workforce issue does not lend itself to easy, short-term answers,” the report said.

Anecdotally, some have left the behavioral health field to work in fast food restaurants, which are lower stress and make significantly more money, as noted in the commission’s report. High burnout rates, large caseloads and low wages are even worse in rural parts of the state.

The committee pushed to increase provider reimbursement rates, which they said contributed to low salaries and made it easier for other states to poach workers from Indiana. But the committee didn’t provide a funding number for a rate increase.

Whether the legislature will accommodate the increased funding request to support Hoosiers with mental illnesses remains to be seen. Earlier this week, the Bureau of Motor Vehicles revealed an ask for $70-90 million to update its 16-year-old operating system, a public health commission will ask for an additional $250 million in public health and inflation has cut into previous allotments for capital improvement and roads budgets.

The State Budget Committee hasn’t yet posted its budget calendar but is set to begin sometime in November. The next revenue forecast, which will largely influence what direction the budget will take, will be released in December.