Maurer repeatedly highlighted proposals to print “receipts” for voters and conduct pre-certification audits for all 92 Hoosier counties to boost voter trust in elections, while Wells emphasized her confidence in Indiana’s systems and accused Maurer of perpetuating Trump-esque election fear-mongering.

“I can’t tell you how many of our neighbors I’ve met out campaigning who say, ‘My vote doesn’t count. My vote doesn’t matter. The system is rigged,'” Maurer said. “… Our opportunity here in this election [is] to restore trust in our elections with common sense solutions: receipts and audits.”

Wells pushed back on his mindset.

“We must be operating from a fact-based, evidence-based place,” she said. “Yes, we do have a voter trust problem, but that is because we have been living through the last years of perpetuating a Big Lie. … We can’t further add fuel onto the fire and say that your vote doesn’t matter or count, and that we’re going to have a 92-county audit.” 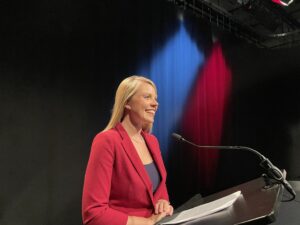 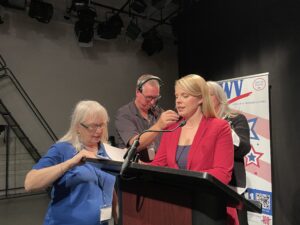 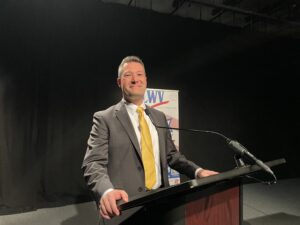 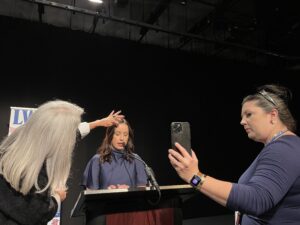 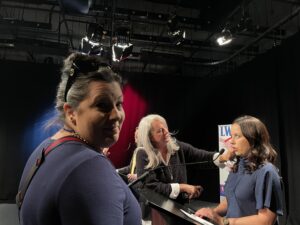 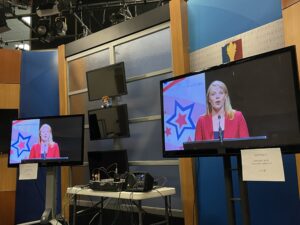 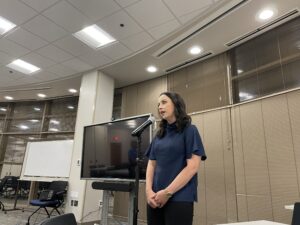 Maurer said his audit idea would require an independent company contracted by the state to conduct the audits, comparing the task to what large Wall Street companies do quarterly.

Republican nominee Diego Morales didn’t respond to debate invitations and both candidates lambasted him for not participating.

Maurer said Morales’ absence indicated he was overconfident he would win, and compared him to Russian dictator Vladimir Putin.

In a post-debate media availability, Maurer said his dual policy proposals aren’t alarmist, but are instead “telling voters that we’re doing everything right.”

“When you maintenance and service your car, you get the oil change before the light comes on. Or you change your brakes before they stop working. So this is good preventative maintenance on our election system,” Maurer told reporters. “… We’re taking proactive steps to anticipate that this could be a problem and we’re going to solve it now before it becomes a real problem.”

Wells, who at the end of the debate called herself the “only pro-democracy candidate on the ballot this year,” urged caution.

The League of Women Voters of Indiana hosted the debate, moderated by University of Indianapolis professor Laura Merrifield Wilson. It was broadcast by WFYI, local PBS and NPR stations and streamed on WFYI’s webpage, and is available for replay on Youtube.

Leslie joins the Indiana Capital Chronicle after covering city government and urban affairs for the Indianapolis Business Journal for more than a year. She graduated from Northwestern University in March 2021, and has reported for the Chicago Tribune, Voice of America and student publications in Evanston, Illinois, Washington, D.C., and Doha, Qatar.

Indiana has nine congressional races in Indiana: what you… by Whitney Downard October 19, 2022
Morales and Wells go head-to-head in sprint for Secretary of… by Leslie Bonilla Muñiz October 25, 2022
‘Chaos and Confusion’: The Campaign to Stamp Out Ballot Drop… by Stateline, An Initiative Of The Pew Charitable Trusts November 3, 2022